DTC VOICE OF THE CUSTOMER 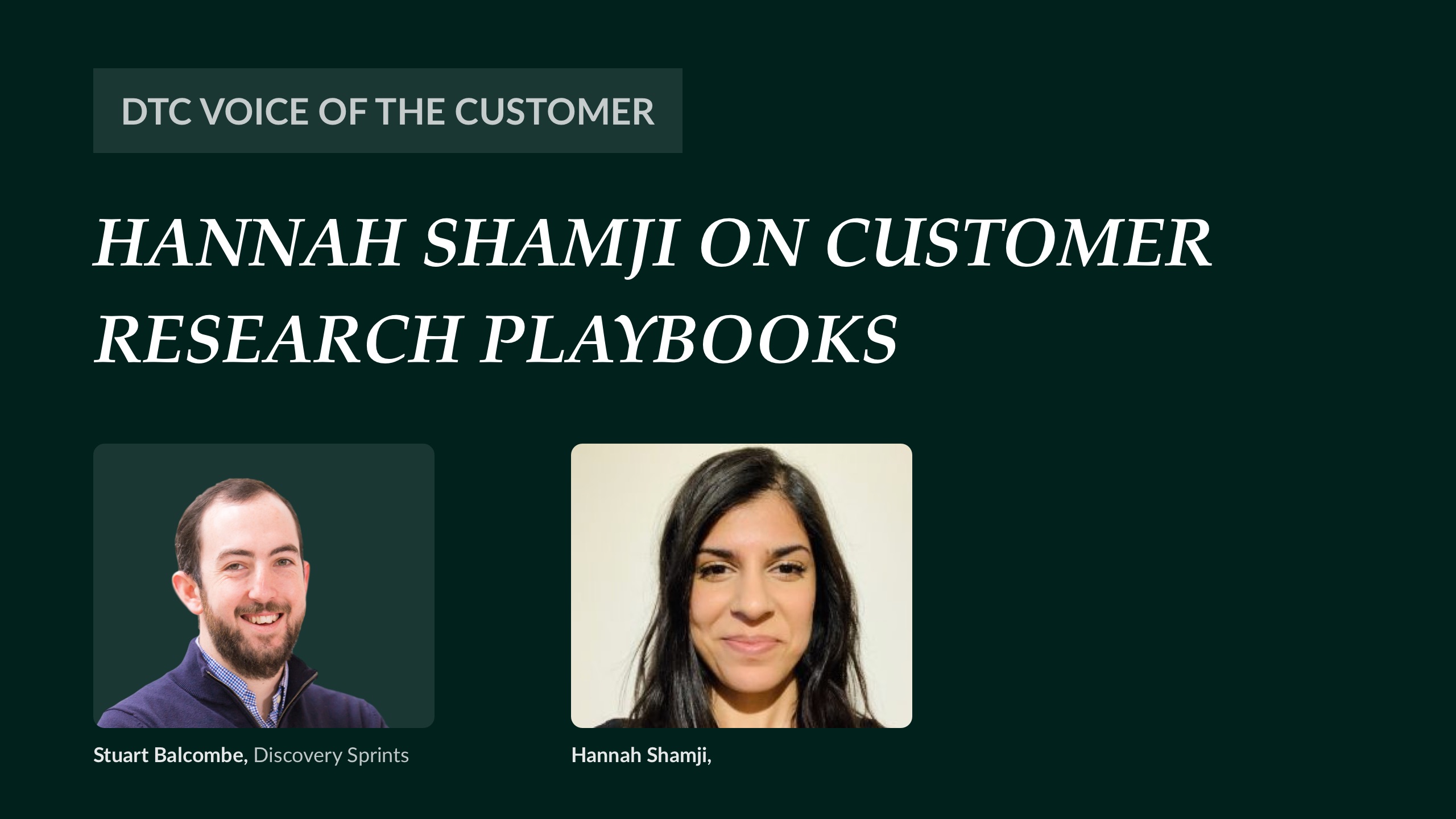 The chances are you know customer research is a helpful tool to grow your business but when it comes to actually doing effective research it can feel intimidating and easy to deprioritize. Today I’m joined by the former head of Research at CopyHackers Hannah Shamji to chat about the research playbooks DTC brands can use to go beyond the numbers and start capturing the voice of their customers.
‍

Listen to the episode above, or check it out in your favorite podcast app.

00:33 - Quantitative data is sexy, but falls flat in isolation

Quantitative data is tidy and attractive, but messier qualitative data can tell you how to move the needle and manipulate the current picture.
‍

“I think quant is very tangible, right? It's so easy, it's very neat and tidy and you can see a number and react to a number  on a scale. It's just very accessible. And I think that makes it feel more robust. Like, "Oh, I've actually distilled all of these findings down to something." But once you have that, something, it's kind of flat. Like how do you move it? How do you, like, why is it that number and not a bigger number? … you do have to kind of like, peel back that curtain and go behind the number layer and look into like, what I'm calling, I call it like "The messy data" right? The stuff that like, might not always fit into a nice little bundle, but will actually help you change the quantitative, change the numbers.”

02:51 - Qualitative data can be distilled into something actionable

The key lies into distilling qualitative data into digestible chunks, so that quant and qual eventually become two halves of the same whole.
‍

“there is tremendous value in being able to distill qualitative data into something that closely resembles quantitative. Like you can, to be able to shrink it down into something bite size. So it is meaningful. So it might be able to, not necessarily fit on a dashboard, but be easy to reference, digestible, useful, actionable. That does require you to take the messy and make it not messy...I always try to broach it in two. Like, ‘okay, well quant is half.’ So how do we get the other half?”

09:04 - Surveys are an approachable starting point for qualitative research

Brands just starting on the qualitative journey should put simple surveys in place, with the final question asking if they are willing to be interviewed.
‍

“I typically like to start with surveys just because it's an easier - I think it's more comfortable if a brand is not as familiar, or used to, or hasn't done interviews. And then, at the last question of the survey, tee it up to have folks join and do an interview…you can have follow up questions in a survey, but in an interview you can explore some of your hypotheses without biasing the interview in a way that you just get a lot richer insight.”

12:49 - Survey data can help you perfect your brand messaging

By collecting a baseline understanding of your customers, you can ensure that your messaging, copy, and positioning are on track.
‍

“why are folks buying, right? That's going to be your biggest bang for your buck. Get you some messaging and some clarity on like, is your value prop synching up with people? Should you optimize your copy in any particular way?... So when someone just signs up to your list, you can ask them ‘What made you sign up to the list?’ Of course, a little more nuanced than that. Like, ‘What made you sign up for, what made you look for X or X is perhaps the product or the service?’ And what that'll do is help you get a sense of who are these folks on the list. What are they looking for? What do they want? And you can use that to really start to match your messaging, understand who your reader base is.”

Catch customers while they are fresh off of a critical action, such as signing up, making a purchase, or cancelling.
‍

“a cancellation survey is really, really powerful. You're looking there at what made you decide against this, right? Then if something that you can fix, if it's something that's like, ‘Oh, well, why don't we just make sure we include this information up front?’ and we can eliminate or minimize a cancellation or churn.”

“response rate can be really high if you put these surveys on the back of an action that they're already taking. So like, they just signed up and as you're thanking them, you ask them, ‘Hey, by the way,’ it minimizes the need to recall. You're not making the survey an entirely separate event, which can feel very similar, like work...and you get much more accurate insight cause they're not thinking about what they're doing. They're right in the action in that particular moment.”

“Do not mix two ideas in one question. Even if it is technically a compound question, so they do tie together. You want to keep it really, really simple. And if that means two questions, go for two. So one actual question that you're asking per question, really simple language, like exactly what you're saying conversationally. If you wouldn't say it out loud, maybe don't say it in the survey. You don't want people stumbling over the words. And I think sometimes, I'll be really careful of bolding or capitalizing a word that is pretty critical to the sentence.”

26:19 - Start surveys with easy questions, then give your reader the mic

“if there's a decent chunk of time between the event and then you asking about the event, the survey needs to sort of act a bit like a prompt. So you start, you want to always start with like really easy questions, right? Like kind of factual, reference point. You're not getting them to think. And then over the course of the survey, they might start to remember things that you're not necessarily asking about, but that would be helpful to know, or they want to share, and that question can really be them like - it just becomes this bank of insights that you kind of just got as a bonus...people will really, really share if you give them the mic in that last question."

34:22 - How should a brand just starting out approach surveys & interviews?

Set up two surveys: an initial survey and cancellation survey and keep them static. Then, dip your toes into doing interviews using that pool of survey takers.
‍

“I would have them start with those two surveys. So it could be an opt in, so either on the thank you page, or as you mentioned, the welcome email, and pop into the cancellation survey. On the end of both of those I would ask for folks to sign up if they're interested in talking more. And then I would leave them like static. I think those are really, really good placeholder surveys that you would just want to have, and be looking at the data pretty regularly. And once you get those interviews coming in and interview requests, I would start booking right away.

"What are those conversion points that are lower than you like, or that you really want to emphasize or focus on? And I would speak to those in the interviews. That's going to be a really good place for you to, rather than kind of getting lost in which survey at first. Just have those  static pieces or static surveys, and then use them to set up these conversations.”

38:59 - It’s surprising how much people will share in an interview

While an interview may start out slowly and with short answers, keep pressing. Both you and the interviewee may end up surprised by the deeper insights that emerge.
‍

“the surprising factor has been, for me, and maybe continues to be, is that if you just sort of stay with people in an interview in particular, they share a lot more than they even think they were going to share. And sometimes even I think that they were going to share in the beginning, often to the  point that they will have this moment of like, ‘Oh, I didn't really think about it like that.’ or ‘I didn't realize I do that, but yeah, that's kind of what's happening.’ But it does require you to really dig and ask the follow ups and kind of chase your curiosity there.”

Confirmed! We'll send you new episodes every Thursday.
Oops! Something went wrong while submitting the form.